Last week was as eventful of a week as I have had in awhile ... as the weeks tick by I find myself moving slower and slower ... but with each passing week I get closer to holding and caring for my little Ernie ... every night feels like Christmas Eve at this point! I keep thinking ... tomorrow could be the day! 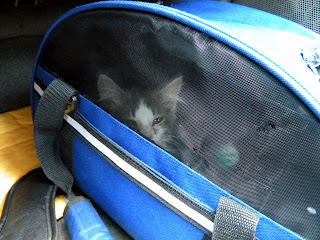 Anyway, my husband and I had an interesting day when he discovered the most pitiful pretty tiny kitten sitting right outside his office door. He contemplated what he should do about it for awhile ... we don't live in an area where it's easy to help stray animals and I think most of the time they just end up feral or dying. However, being the big softy that he is, my husband opted for a rescue operation!

We collected the kitty and drove to the nearest shelter we could find that was still accepting animals ... about 35 minutes away ... only to find out - THEY WERE CLOSED! Ugh. What a pain. The poor little sick kitty was just cooing in the backseat in it's little carrier probably scared and confused. Luckily my husband was able to keep the kitten at his work - we couldn't bring her home because we already have 2 and didn't want to expose them to anything she may have ... or expose me and Ernie for that matter! It was good for kitty though, she had a couple of days inside with food and water.


It took me all Monday morning to call around and finally find a place that would take her in. It's funny, there are "groups" in are area that help to get animals adopted (a great service!) but not many who will take in a stray and get it cleaned up and ready for adoption (wierd right?) ... I was pretty much on the verge of tears when I decided to call the animal hospital we take our cats too ... about 15 seconds later they said they would take the kitten, get her straightened out and help her find a home! YAY! 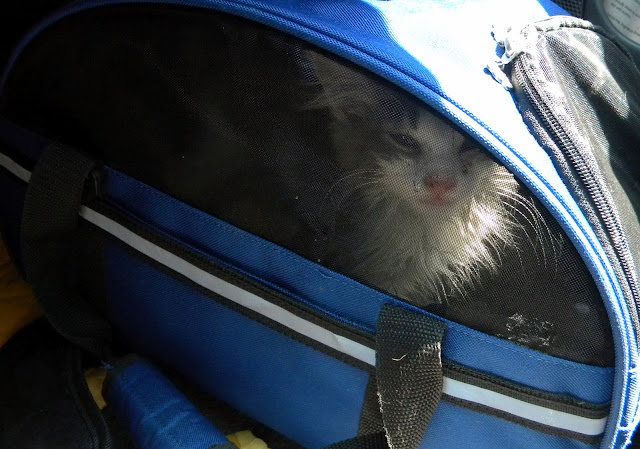 I was more than happy to drive the 45 minutes to the Animal Hospital knowing that the kitten would be cared for... plus I got to do some shopping in Hazard, practically the big city to where we live! We donated the carrier and some money towards her shots/tests. She was a super sweet kitten ... if I wasn't pregnant I probably would have considered taking her - but I will have my hands full in no time!


Ratatouille!
My husband is quite the cook. He is modest about it ... but there are few meals he prepares that I don't LOVE. I'm not saying that I'm horrible ... but I think he just enjoys cooking more than I do. I just love it when he finds a special recipe and gets excited about it. His homemade pesto is incredible! One of his newest culinary adventures was Ratatouille. I won't lie, we were both inspired after watching the Pixar Movie ... but then again I don't know many people who weren't! Despite the whole rat in the kitchen thing - I was ready to go home and cook and drink wine right after leaving the theater!

It's funny he wanted to make Ratatouille considering he is particularly NOT fond of vegetables ... especially when there is no meat involved! I think he wanted to make it for me (I LOVE VEGGIES!) - I haven't been cooking much the past couple months because I honestly have not been inspired at all and have zero energy by dinner time. He is very sweet.

We found our recipe from a great site called The Kitchen - anything that can be cooked in a dutch oven pretty much perks our interest. I must say I did my fair share for this meal ... check out all that chopped deliciousness below! 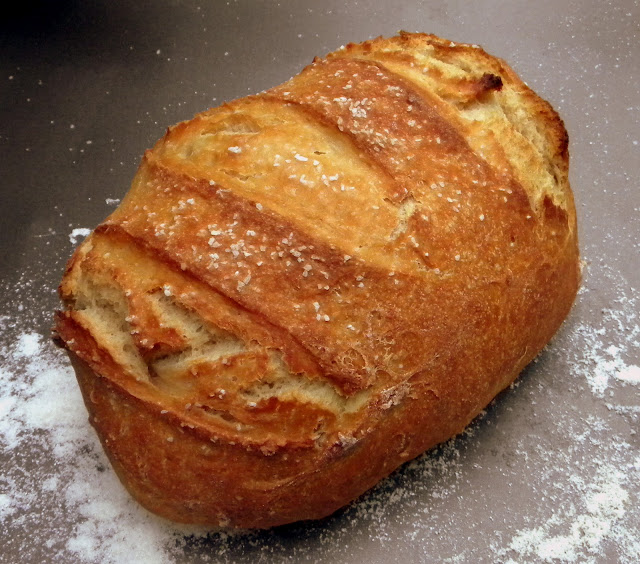 Here is a shot of Q's awesome homemade bread - he makes it from scratch and this loaf came out perfectly! A nice crunchy and salty crush and hearty insides - it went great with the ratatouille! 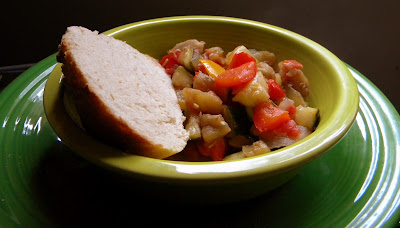 Over all the dish came out perfectly! I think we both realized quickly that it wasn't really great as a "stand alone" type of dish. I think if we made it again we would leave out the eggplant and substitute with mushrooms and maybe  yellow squash. Beans would really kick this up into a more substantial meal too! I will say, just  following this recipe, it was soooo delicious and I really loved it! I can't wait to try this again and hopefully have a glass of wine to go with it! 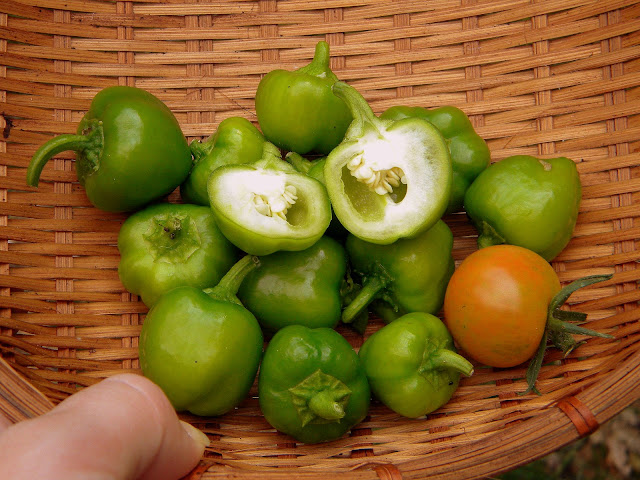 The plants are really starting to produce! These are just a few of our mini bell peppers that were ready to be picked! I hope to throw these into different meals throughout the week ... the lone tomato came from one of our Tommy Toe plants, not quite ripe yet but I couldn't resist. It should still be ready to eat in a day or two!

I'm not going to get to far into depth here about the homebrew process as I was more of a passive observer of this process. My husband and some friends have been collaborating efforts to make some potentially yummy beer! I hope to try some ... eventually! 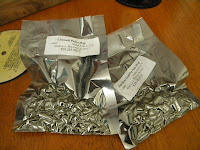 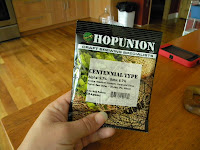 Hops! They smelled delicious! They are all added at different time during the brewing process... 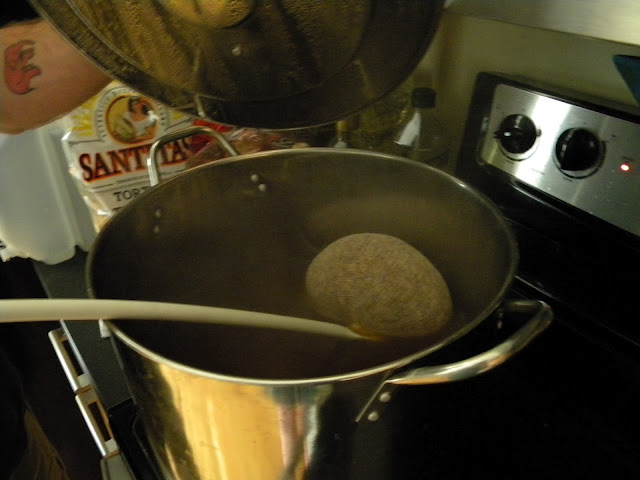 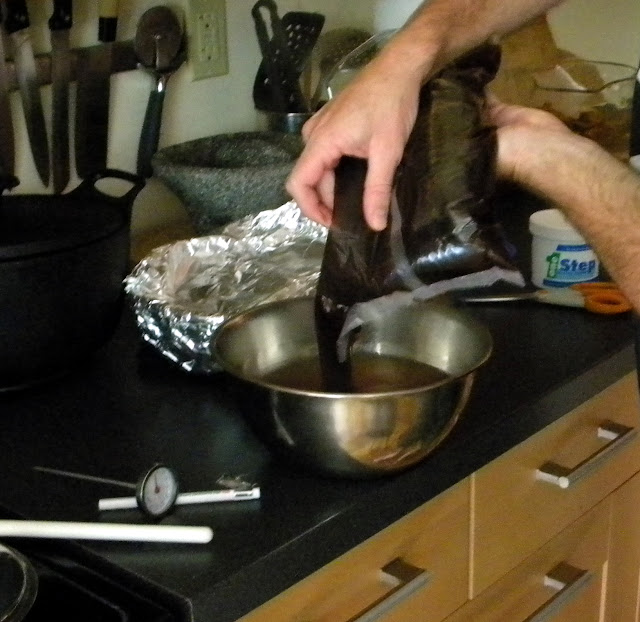 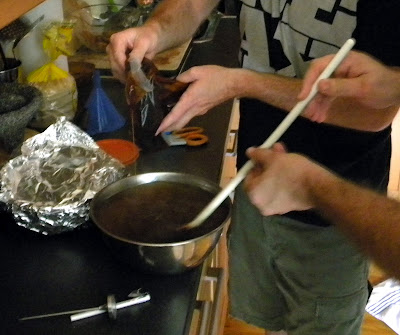 Mixin' the malt in the hot water before adding it back to the large pot ... many more steps happen that I have totally left out! oops! 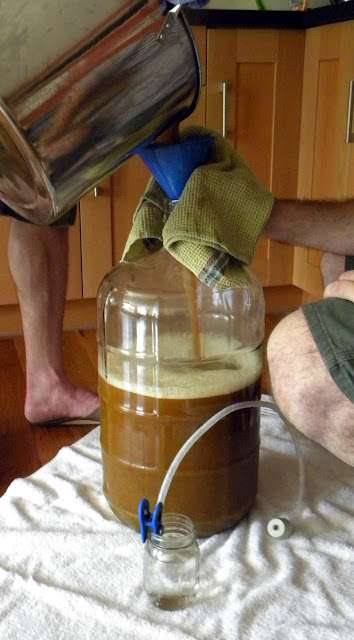 Adding the cooked mixture to the "carboy" ... the small mason jar is to help the beer breath while it sits without allowing any air get into it (it sucks up the water instead). 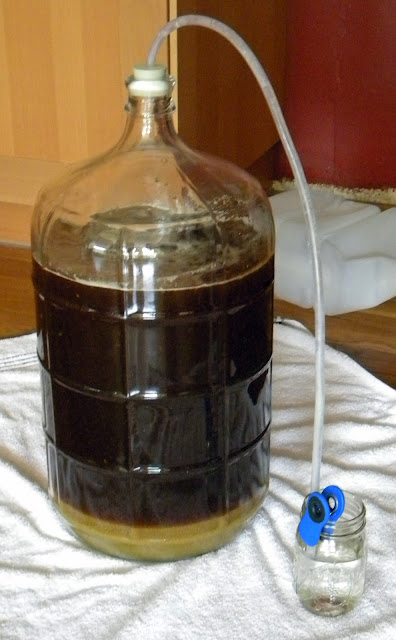 And now we wait ... about two weeks until it's ready for bottling!

I can't stress enough - this is by no means suppose to be instructional as I have left out many many details, ingredients and steps. I hope to actually participate in the brewing process one day ... Just felt like sharing!

------
On a crafty note ... I spent most of last week getting a swap together ... I don't want to post any pics yet until I know my swap partner has received my package - I don't want to spoil any surprises!

My blog's namesake was inspired by my talented and wonderful Grandfather, Rev. Alfred B. Rollins. This is a poem he wrote that became a reality for him.

Becca
I'm a native Floridian but I am currently living in Pennsylvania. I am married and have two young children.